And yet again in the midst of life

My father and I have had so little contact with him since 1974 when I left home to marry Glyn and my whole adult life has been lived without him, or his influence. And yet, and yet....when I think of my life, my values, dislike of hypocrisy, belief in hard work, education, and all manner of other attributes that I may not yet recognise as belonging to him, I think I carried his influence with me for many years.

I have missed having my parents and family around me. I will explore all this as I begin to write my memoir at last, but here is a space in which to think about everything.
Posted by Sara at 23:00 No comments:

Joseph's Auntie Muriel died last week and we are to attend her funeral next Monday. She was a lovely old lady, big smile, big hearted up to the end and I am sure she will be missed. Joseph's mum is looking so frail and so is Lily despite her brave protestations that all is well.

At least they are old ladies!

Tomorrow would have been Glyn's birthday, his 67th. I always wonder what he would make of the world we live in now, because even in the time since he died in 2004 the world has changed almost beyond recognition. Politics would dismay him, technology would astound him, the state of the world would make him despair. I cannot think of what he would say about anything current and that makes me sad. Once I would have known how he might respond. These days I just lack either information or imagination. That upsets me because we were together for nearly 30 years, and that ought to mean that I knew him well enough.

Its that old teaser, time. Edges blur, focus shifts, it is impossible to play the "what if" game anymore. I don't know whether that is somehow something lacking in me, or whether that is just a feature of being a survivor of widowhood. Being remarried might have something to do with a change of perspective, a chance to re-evaluate. I feel as though not ten but tens of years have passed me by. I can't get a grip of what I am supposed to do with this gift of extra time.

I wonder whether its my fault, or whether the fault lies in the fact that we are out and about so often and I get so exhausted? I don't know. But surely I can find the path I should be taking? After all this time, after all these years?

Anyway. Happy birthday Glyn. Not forgotten today or any day.
Posted by Sara at 23:29 No comments:

We saw an excellent raw production of Macbeth from the Globe theatre at our Light Cinema. I loved it as I love all the productions we have seen since the series started. I don't think I have ever seen a cruder Tempest but still wonderfully done from the Globe but my favourite productions have been Peter Grimes done by ENO and King Lear by the National Theatre who have also given us Warhorse andThe Curious Incident of the Dog in the Night. I love theatre and opera and ballet and this gives us a chance to see these things unclose as they say. It has become a favourite way of going to the cinema.

The weather has been glorious except for Friday when it rained all day and I was full of pain. I need to get some handle on what is happening to me to make the pain so much worse. I want to live without pain and in happiness.

So to Rhos for our embroiderers guild meeting. i felt my time had been wasted when about 20 minutes and a few slides in the speaker said that that was that and we could go and look at her work and her workbooks, which were interesting but not spectacularly so. I can do without work based on car parts and air filters, concept art which doesn't particularly interest me.Maybe that was my fault but we had had a lovely day up to that point looking at a wonderful new exhibition in Ruthin craft centre of which more when I get the photos done, and possibly I was not really in a mood to be receptive.

Today the weather is glorious and we are stuck here as I get the washing and ironing done for going away to Southampton. I hope its worth it!
Posted by Sara at 15:46 No comments:

Today would have been Brendas's 70th birthday so J and I had a day out in her honour. We went to Chester Zoo because that was a place that she liked, and that we both really enjoy. The best part of the trip today was seeing the Spider Monkey who did a trapeze artist dismount and more or less fell through the tree he was aiming at. Monkeys always fascinate me, their hands, their faces, their tales especially when they are prehensile like those of the spider monkeys. It was only a quick spin through the zoo as it was crowded and we can go back when the human animal babies are back at school. Some schools are back already after Easter but not all as we discovered.

Next we had lunch at The Bells in Christleton and excellent it was too, pizzas, tea and a biscuit. We tried to go to the antiques emporium whose name I have forgotten which is south of Nantwhich but the traffic!!! There were queues everywhere including queues to get off roundabouts. We went to Nantwich in the end, and spent a half hour in the Oxfam shop there. The woman in charge told us that  she had been asked to take a personal delivery of some books and CDs and she had agreed thinking that there might be a van full. In the event, two removal lorries turned up. These had belonged to someone who had ended with just enough room to sleep in. A moral there methinks.

Thence to Bunbury and a coffee in a pub, where I sat with dripping hair, and the dog was made a fuss of and given treats which she really doesn't need. And finally home.

This is the second time this week that I have been soaked to the skin and I have a sore throat. I have fingers crossed that it will subside and my cough improve before we go to Petersfield.

Son back off ship yesterday but I have yet to hear from him and we are supposed to be going down there come Friday. I wish we hadn't booked now. It would be easier to be ignored at home than if we have made the trip down and are made to look like fools by a no-show. Oh well! Plus ca change as I have said on more than one occasion in my life. 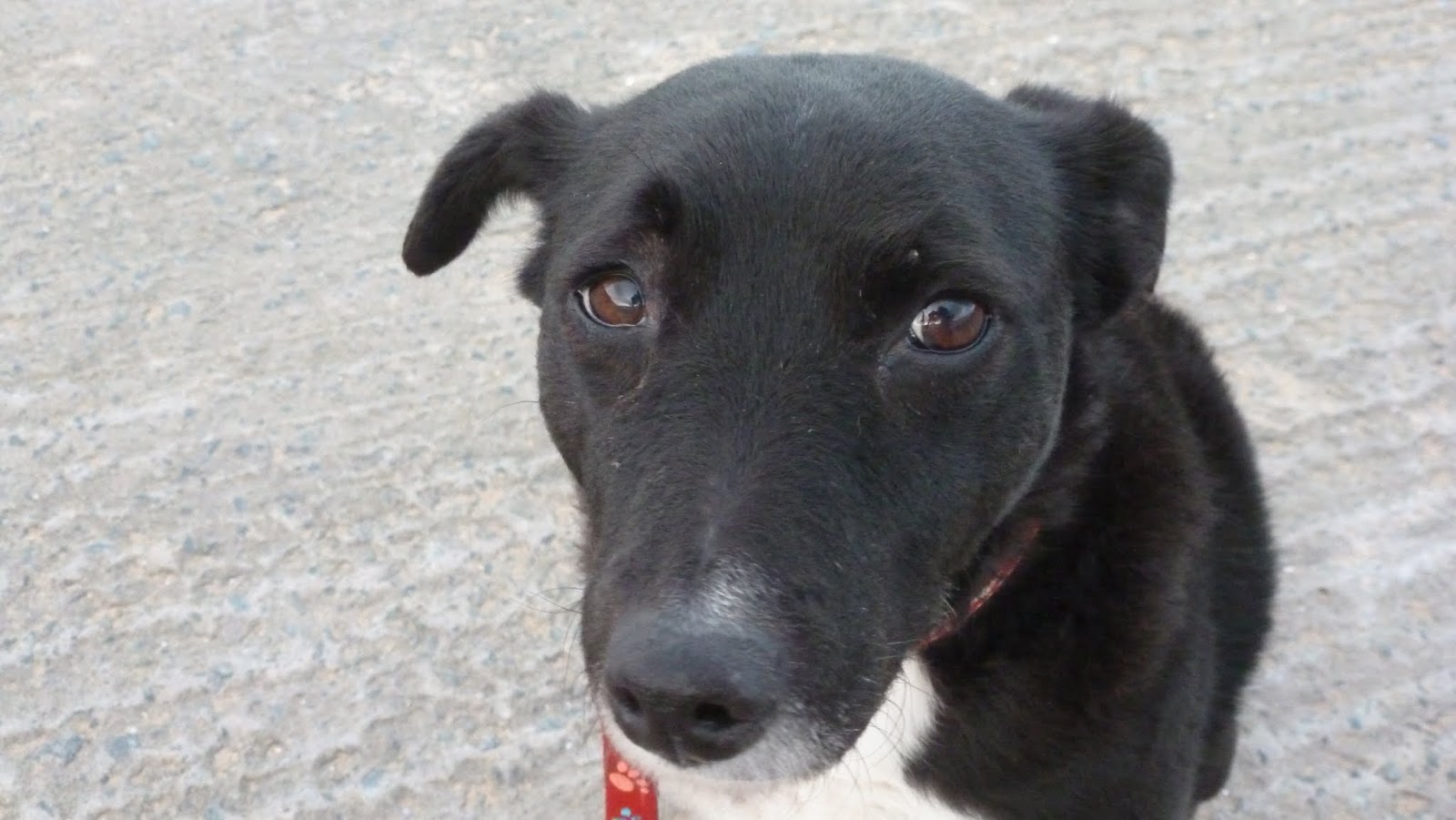 And just to finish.. a photo of Marthadog. xx

I have finally decided to invest in myself and my belief that one day I will write something that matters. To this end, here is the first posting on my brand new Mac. It cost a small fortune but it feels great, the screen is wonderful, I will be able to use my photos directly all being well, and I will be able to start to write here by a bright and sunny window in a chair that is remarkably comfortable seeing that I have been sitting here for a good couple of hours trying to get everything sorted out.

It is still hard to spend money on me. I just feel guilty all the time. Guess that is how I will be for the duration

Josephs mum is in a home. We had a huge drama yesterday when she basically had either a panic attack or a temper tantrum. Not sure which. Anyway, she has been for an EKG and thankfully there was nothing too untoward for an old lady of 89. Her BP and Kidneys were fine as mine are not... So now there is a pow-wow to decide whats next and I am not sure what they will do, they being Christine and Hilarie my sisters in law and J my hubby. Interesting times.

Thats fine for this posting but how easy it all is on this machine.

I am so ashamed of myself - its nearly the end of Feb 2014 and I haven't even looked at this blog for such a long time.
I don't have writers block I have a block abour writing itself. Perhaps I know that once I do start everything else will fall away and I will be jealously guarding my time, and at the moment we do a lot in our lives and I don't want anything to interfere with that precious commodity - time.

Time is a curious concept. We have clocks to measure it, so time must be progressing at the same rate every day, so why is it that time seems to run ever faster for me. I can't begin to believe that I lost Glyn nearly 10 years ago. TEN years. Its the same as from 10 years old and at school to 20 and being away at the Academy and learning about life. Ten years is a huge amount of time. No wonder Proust wrote so much about it in La Recherche etc etc. And so does, in a much smaller and more accessible way, Penelope Lively in her book Ammonites and Leaping Fish which deserves many quotations being copied out.

We were in Spain just a month ago, watching the hills turning into brides covered in confetti as the almond trees came out in blossom. This year, more than ever, it was the country that called to me and not the hotel or Nerja in particular. If I were alone I would live there, endure the summers but love the rest of the time, and it is only really bad around July and August. Oh well. That was another life. Life after Life as Kate Atkinson might have put it.

I miss the mountains, I miss the views, I miss the sun and the depth of blue in the sky. I miss the lovely relaxed atmosphere which is so much a part of the country. I love the language although I don't speak Spanish. I just would love to go back and go back soon, It will be next year though before we do which is a shame.

Now, here in Leeds, its dark and damp. I suppose that the diagnosis of COPD that was finally put onto my records has rattled me. I am fed up not of coughing, but of the exhaustion that comes with the condition. But, I will not be defeated. I will live in the sun by the sea one day. I will.

books I am reading

Music I am listening to....